Solutions. A dramatic transformation allows for lofty living in a basement.

When a young professional bought the last loft-style apartment in a 1912 downtown Denver building, he turned to architect Doug Walter. The transformation needed to  bedramatic. It was a basement apartment. “The raw apartment was spectacular,” Walter says. “It was a big, open space with concrete floors and large columns. We knew right away that we’d want to keep it open.”

The key issues of light and privacy were apparent. The 3,700-square-foot basement had windows on two sides that began about five feet up the wall. “Letting in as much light as those windows could was critical,” Walter says, “but preserving privacy was also an issue. The idea of using shoji-type screening seemed natural.” Another design element allowing for natural light throughout was to have most walls not extend to the ceiling.

From a space planning perspective, the rooms were logically positioned. The master bedroom was placed in the most private corner of the apartment, away from the windows. The same logic put the large kitchen, designed as the social hub of the apartment, in the corner with the best natural light. A curved wall that conceals storage was designed to draw people from the entryway into the apartment, creating a sense of movement through the space.

Not surprising for a basement unit, the plumbing was a hurdle. Getting the drain lines in place required trenching through the floor slab. From a design standpoint, the concrete floor turned out to be an asset. The homeowner decided he liked its industrial feel and commissioned an artist to create a rich, dramatic skim coating in shades of green.

Also a challenge was to create a highly effective artificial lighting plan. “We knew that careful selection of electrical lighting would be very important,” Walter says. “We were limited in our choices because we didn’t want to sacrifice any of the 8-foot-6-inch ceiling height with dropped ceilings that would have allowed us to install recessed fixtures.”

Task and mood lighting was carefully integrated into the overall space. Track lighting was utilized in several areas, supplemented by wall sconces and lamps. 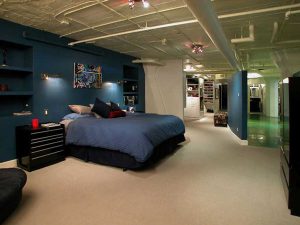 “We specified halogens throughout because they offer more lumens per watt and a pleasing light that’s whiter than others.” The net effect: soft and variable illumination throughout.

Today, several words leap to mind after time spent in this comfortable, wonderfully eclectic home. Basement is not on the list.

Check out our many customer reviews on Guild Quality.